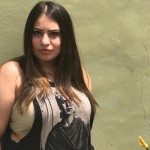 Raquel Reichard is a New York- and Orlando-based journalist and editor covering Latinx social justice, political and cultural issues. Formerly the politics & culture editor at Latina magazine, Raquel's work has also been published in The New York Times, the Washington Post, Teen Vogue, Cosmopolitan, Mic, the Fader, the Independent, Remezcla, Bustle and several other publications. She has a bachelor’s degree in journalism and political science from the University of Central Florida and a master’s degree from New York University’s Gallatin School of Individualized Study, where she centered her research on race/ethnicity and new media. Born in Far Rockaway, Queens, New York to Puerto Rican parents, she spent her childhood on the Caribbean island and was raised in Orlando, Fla., making her a proud NuyoFloRican.

Women In Mexico Have Started Their Own #MeToo Movement

Study: Police In The Dominican Republic Are Abusing Women Sex Workers With Impunity

Up Next: Meet Katalina, The Colombian Funny Girl-Turned-Pop Singer You Need To Know

You Can Thank Machismo For Our Dying Planet, Here’s Why