These days, whenever I get the nostalgia bug and find myself clicking through J.Lo and Thalia music videos, I can’t help but slightly mourn the styles they wore. You know the ones. I’m talking about the elegante glittery navel Christina wore in the “Come On Over” music video and the curly bangs Mariah made us go crazy over in “Vision of love.” The ones you’d never wear now, but kind of still want to.

Looking back, there are so many looks worn by my ’90s and ’00s idols that I thought would be my aesthetic the moment I grew up.

Here’s to the looks that you always imagined wearing but never actually got to wear. 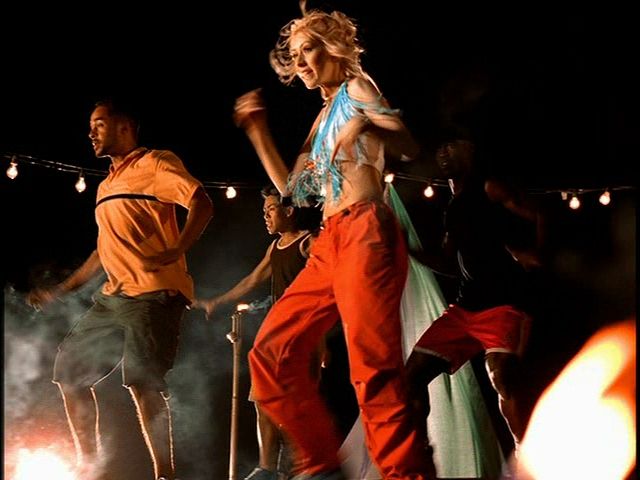 CREDIT: Genie In A Bottle / Youtube.com

So you thought you’d wear orange army pants and fringe. Watching Christina tear up the floor in “Genie In A Bottle” was everything to you until she graced your screen with those iconic cargo pants the color of Tang and flashed her abs beneath a beaded fringe top. All your dreams could have come true if only you could have rocked them.

I actually once used saran wrap to copy this look…

CREDIT: “If You Had My Love” / Jennifer Lopez / Youtube.com

Ah, the J.Lo glow and jeweled seethrough sarong. The music video that motivated me to try out the look with kitchen supplies actually had so many classic outfits to choose from. Who could forget the torso necklace look?

Long before Saldana was rocking the colors of Crayola across her body, she was trying out different tints to make her eyes pop. These days, blue shadow is considered a pretty strong look, but you know somewhere in the back of your childhood closet in the boxes of old clothes and makeup you want to donate there’s a sample of flaky blue shadow you still can’t bring yourself to chuck out.

But let’s never forget the days you dreamed of burning cash on some Rockawear bling.

Given today’s style trends and their inclination to embrace the ’90s, you probably actually could pull off Christina Milian’s jerry-curled blinged-out look from “Love Don’t Cost A Thing.” Still, there’s no telling how seriously people would take you and your hip belly necklace.

Remember when you cut off the top of your high-waists to look like Mariah?

I do, and I remember distinctly fearing for my life when my mama found out.

Looking like you were dragged through a field of daisies was a total “maybe one day” dream, but NOTHING had you pining for the day you had autonomy over your own hair like the princess of telenovelas. Her bleached top locks wouldn’t go over quite so well in today’s age of baliage, but I’m willing to bet you’d find a way to wear them right.

And a moment of silence for when you dreamed of mastering the curled under flequillos.

In the age of curtain and chunky bangs, the curled under look is a bit of a risk. But with so many channeling the Tejano star and her looks, whose to say this one actually wouldn’t be a huge hit.

Was it a hat or a headband? Who knows? But fans of the television host knew they would totally be jamming with her looks when they got older. Shout-out to the moment you realized you’d sooner die than be caught in those multi-color bubble bands she so often wore.

RIP to the dreams that had you sure you’d achieve Shakira-level rebellious.

If Shakira’s “Ciega, Sordomuda” did not completely define sexy girl ideals for you, then I’m not sure what did. Those colorful twists and her smokey eye were the epitome of ’90s rebel chica style and, straight up, I believe you probably could rock it today.

Read: 9 Natural Hairstyles That Prove You Don’t Have To Straighten Your Hair For Prom

Recommend this story by clicking the share button below!

Frida Kahlo’s Latest Art Exhibit Is Coming To The U.S. During A Time We Sorely Need It